Breaking the Silence: The Generation After the Holocaust

In 1978, Fogelman was leading a group for children of Holocaust survivors with Dr. Henry Grunebaum in Cambridge, MA, which became the subject of Breaking the Silence.  The film portrays a number of survivor parents and their children who are trying to break the silence that has separated them. The parents are among an estimated 200,000 Holocaust survivors who settled in the United States.

The Holocaust created a legacy of trauma and pain, not only for those who experienced its horror, but for their children as well. This documentary tells a story of personal growth as the children of Holocaust survivors confront their inheritance of pain and overcome the silent barriers that separate them from their parents. As the parents and children reach out to each other, the second generation grapples with the questions of teaching the Holocaust to their own children. By interweaving poignant dialogues with commentaries by Dr. Robert Jay Lifton, Professor Moshe Waldoks and Professor Helen Epstein, Breaking the Silence sensitively depicts this healing encounter between two generations.

Breaking the Silence: The Generation after the Holocaust was telecast on WNET Friday (April 27, 1984) and was shown on public TV stations in 156 cities in 48 states and the District of Columbia.

The film received international acclaim and was shown at the Berlin Film Festival (1985), the Jerusalem and Tel Aviv Cinematheques, the American Psychiatric Association, the Jewish Museum, and the Joseph Papp Public Theater. It received a Blue Ribbon at the American Film Festival, a CINE Golden Eagle Award, and an award from the National Council on Family Relations.

Co-Produced and directed by Edward A. Mason, M.D.; co-produced and written by Eva Fogelman, PhD. USA, 1984, Color, 58 minutes. Breaking the Silence was produced by Documentaries for Learning in Boston and distributed by Public Broadcasting Service (PBS).

Praise for Breaking the Silence: “…more than a documentary; it is a labor of love which builds a bridge from one generation to another.” —Washington Post

“[The film] is an act of healing – a kind of restoration of lost history… There is a spirit in the film of affirmation – of life going on.” –Robert Jay Lifton, M.D.

“This could help us to overcome our feeling of isolation and to enrich others with the legacy of our past, however tragic.” –Viewer in Colorado

1. Read more about the work that this film has done to raise awareness for and empower the voices of child Holocaust survivors in: Michael Decourcy Hinds “Helping Holocaust Survivors’ Children”. 5 Nov 1984. New York Times.

“Children often say they don’t ask their parents about the Holocaust because they didn’t want to cause them any more pain, and many parents say they never told their children because they didn’t want to cause them pain…The children tend to perceive their parents only as victims and then they may identify with their parents and feel victimized themselves…Many who have lost parents and relatives feel a total lack of trust in the world and in humanity, and that makes it difficult to relate to anybody.”

2. Order the film from The National Center for Jewish Film at Brandeis University.

3. Learn more about Psychological Trauma and the Holocaust from the USHMM Collection. 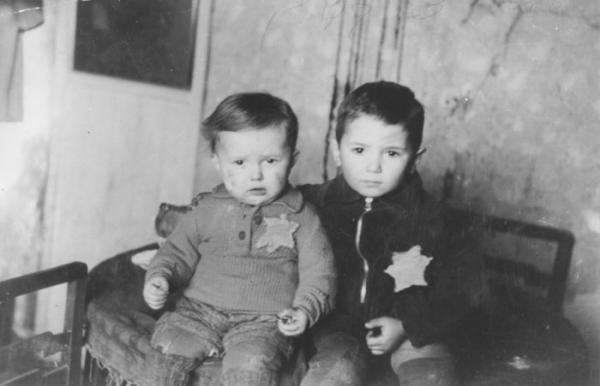 Psychological Trauma and the Holocaust — United States Holocaust Memorial Museum
Holocaust survivors often suppressed the trauma they sustained during the Holocaust, pushing it to the backs of their minds, distancing themselves from the terror and the grief to embrace their new lives.

4. Read more about Children of Holocaust Survivors, ‘2G’, from the USHMM Collection.

5. Discover Resources on Survivors and Victims from the USHMM Collection

Conscience and Courage: Rescuers of Jews During the Holocaust

The Evolution of a Second-Generation of Holocaust Survivor Identity